There's several things we are throwing in from Episode 4 to the latest update, it turned out to be not so small update!

Let's start with how the beginning of the game looks on each version:

1. Scoring system reworked. "Score" has been changed to "kills".

2. Multipliers. You get more kills for bigger targets and blowing up the fur bombs when other enemies are in range gets you even more extra kills. Beast mode gives double kills. 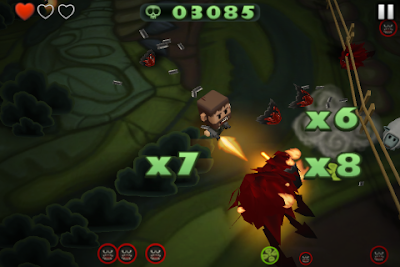 3. Remade snow level. It has different layout and everything from trees to bushes is covered in snow. Remember the original Kid Gore? This is a change of similar magnitude.

4. New difficulty selection. Probably my favourite in terms of wow factor. The camera is zoomed way out to give you a better view of the level.

5. Unique muzzle flashes for all weapons. For now it's just a visual flavour but in Episode 4 it is used to communicate co-op weapon efficiency for each player. The closer players get to each other the bigger the muzzle flashes & faster the fire rate. It's made to encourage cooperative play. 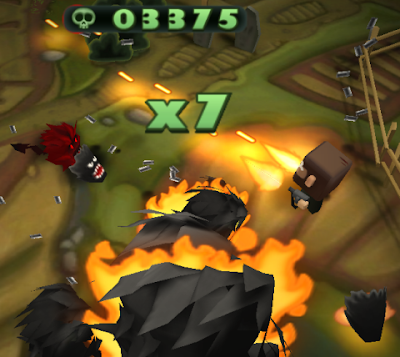 6. Hearts for health visualization. They are displayed in the top left corner. If the character has 5 health states you don't have to remember how each one looks.

7. Clover pick-up and slots right where you pick up the clovers. Makes it easier to see how many you have because it's displayed where the action is at.


Let's not stop quite here, then there's the bug fixes:

1. Retina display enabled on iPod touch 4. We got ipt4 at the office and it's working beautifully on it.

2. Flip screen bug fixed on iPhone 4 and iPod touch 4. This one should remain fixed until Apple rolls out the next device with different resolution. ;)

3. Sometimes fire direction got stuck, it shouldn't do that anymore.


Kimmo is working hard on finishing the Game Center implementation, then the update should be ready for testing & submission.

Please leave a review on iTunes if you use one :)

EDIT! Looks like all promo codes are taken, I'll clear this space so you don't have to scroll so much EDIT!
Posted by Timo (Mountain Sheep) at 6:59 AM 141 comments:

Info about the bug fix coming up!

There's detailed info about the bug fix update coming up in 24 hours!

In short: we put in a lot more stuff from Episode 4 into it as you can tell by looking at this screenshot: 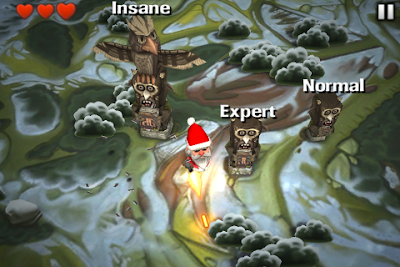 Jussi has been in fever since middle of last week so I might be the one doing the post if he's still feeling ill today.
Posted by Timo (Mountain Sheep) at 4:07 PM 30 comments:

Hello.
We are currently working on the flip screen bug fix affecting iPhone 4, other models should not be affected. The fix itself shouldn't be too hard to make, we just hope it goes through Apple swiftly too. We plan to release support for Game Center at the same time. This naturally means the leader boards will be reset as we change the current system to kills instead of score.
As a side note, we are not trying to offend/disrespect/ignore anybody by releasing an update that does not benefit people with older generation devices. Making the game support Retina display is very important for the future development of the game as the amount of older devices will become smaller. In the Retina display update there was also a bug fix that DID benefit everybody. Especially the owners of older devices. The explosion of the crates lowered framerate and sometimes crashed older devices. We changed the explosion so that it is no longer as demanding on the hardware.
Retina display and framerate support for iPod touch 4 is being made too, we just got ipt4 to the office.
Posted by Jussi (Mountain Sheep) at 4:49 AM 67 comments:

Retina display update is out!

The update should be available for download in the coming hours!
US iTunes is already showing the new icon: 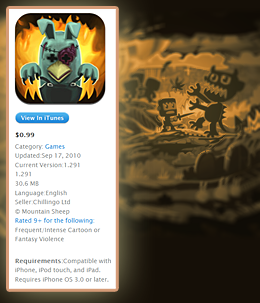 The icon features Kimmo's favourite character "Easter Bunny", everyone else at the office would rather jump off the window (1st floor) than play as that character ;)

There's a huge difference in the level of detail between normal and retina versions: 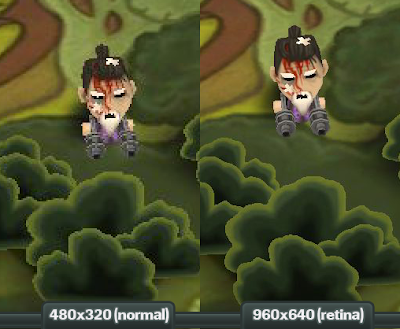 For some reason JPG artifacting is more noticiable in the left side image, but other than that it's a fair comparison. I took the left side screen shot on an older iPod touch and the right side capture was done with iPhone 4.


bharter: Thanks for mentioning the missing link!

Hello for the second time blog followers!
First of all I have to say I'm quite astonished about the amount of fan posts here on the blog and also on Touch Arcade, where I registered to view the beta testing forums. And boy.. believe it or not, the amount of ideas, opinions, bug reports, expectations and all kinds of chatter from the past 1,5 years is making my head spin. I think I was dreaming of Minigore last night too. For a person like me who is quite new to this community the information is a bit overwhelming. However, I think I'm getting a grasp of this :D. That said I'll try to answer some questions I noticed on the blog.
So there's a lot of questions about the release of Episode 4. I understand people are waiting it like there's no tomorrow but unfortunately I won't guess the release date. I'm saying "guess" because there's really no way to know. If I throw a date out of nowhere it is most likely to be inaccurate. It will be released when it's done.
About the totems... changing the difficulty setting midgame with the totems will not be possible. The dynamic difficulty made the multiplayer code too complicated and had to be changed. You choose the difficulty at the beginning of each round. Once you have chosen a difficulty, it will be set to default to new rounds until you choose a different totem.
There was also a question if there's going to be new enemies and the answer is yes. Timo has been pulling all-nighters for awhile and I really wonder if he sleeps at all. Please note that this is probably not going to make it to Ep 4, since the content for that is pretty much decided and we are focusing on finishing the update before adding new features.
I have the great honor to introduce to you, the making of: Metusalem's Monstrosity!!

And the Final Version: 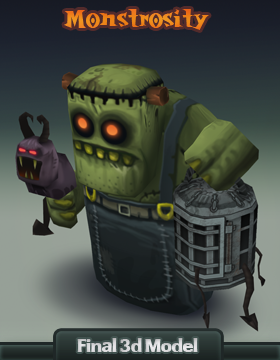 Pretty nice, don't you think? :)
Oh yeah, about Game Center. We here at Mountain Sheep are really excited about the GC. We wanted to see how well it starts and we are pleased so far.
P.s. Now I know where my snacks are disappearing to... It's the mysterious "Timmo" character I'm sure. I wonder if he lurks in the office closet and comes out at night to devour my peanuts!!!
Posted by Jussi (Mountain Sheep) at 5:13 AM 41 comments:

Hello everyone!
As some of you already know, Timo wrote on the blog earlier that Mountain Sheep had hired some new staff for various tasks and jobs. So here I am! :) My work here at MS includes viewing and commenting the blog every now and then among other things. Nice to be here and I hope I don't forget to mention some things about Minigore as it is a bit new game to me still. I've been spending some time studying the game and reading past posts and comments and I hope I don't miss anything important. If I do, have mercy...
So, as my first post here I'd like to introduce the Totems as a new feature. The totems are going to be present when you start the game and by shooting one of the three you will choose the difficulty setting you would like to have. After the selection the Totems will disappear and the hordes of furries will come as before. I think Timo made a great work with them and I think it's a nice improvement to the old choosing method. Here's a pic: 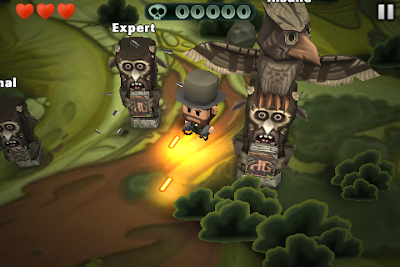 Also as you can see this shot also introduces some other changes. Instead of showing clovers at the upper left corner there will be health shown in the future. This mainly because some characters are not going to have only 3 lives but 5. This new health system will be used in the upcoming multiplayer. This will make it easier to see the current situation without having to remember the changes in the character models. The clovers will be shown at the center of the screen when you pick up one and then they will vanish until you pick up another one. Also the place where the score used to be will be featuring kills from now on. The kills mechanism works a bit different compared to the score before. When in beast mode you will be given a 2x multiplier for the furries you kill, so instead of the old system you get twice the "score" during beast mode. Also for killing the big furries you get more kills than from the small ones.
As a new member to the community and to the Mountain Sheep I also wanted to offer some promotional codes for you to use. By using the code you will be able to download Minigore HD on iPad for free. It would be nice if the people fast enough to get the code would also write a bit of a review on iTunes about it, thank you very much :). If you use a code, also make a comment telling others which codes are used so people can pick up theirs without the unnecessary trial and error method :)
The Codes:
1. 9PPMERHPFWKW
2. KR7K693JXEAH
3. PH9PTANRWY3H
4. R7NAMPL94TWW
5. 94JMM4RPMK6F
6. FNXP7PXL73TL
7. HJTK3TKJKE3L
8. MFTJPHF7HKFF
9. 6J73HHWHAPAR
10. 4YA33W4FEJXW
Peace!
P.s. Almost forgot. Update for retina -display and improved frame rate is in review. The improved frame rate IMHO is a big update and substantially improves the enjoyment of this game. Frame rate affected models: iPhone 3GS, iPod touch 3rd gen, iPhone 4.
Posted by Jussi (Mountain Sheep) at 3:48 AM 111 comments: