Here's what Timo promised. A gameplay video of the penguins! As you can see the Emperor Penguin is surrounded by little helper penguins that give their lives to protect the Emperor! What devotion! Heheh... When playing the Emperor you can pick up more little penguins to help you and also protect you from the furries. As you can see on the video, Timo is picking up new penguins after he loses some of them. I find this game mechanic really entertaining myself! This is totally my new favourite character in the game. Wait till you see the Emperor's beast mode Martin!
Soon you'll get to play with the penguins as well if you bought the Elder Gore character pack. Enjoy the vid!
I'm happy to announce that we received the improved John Gore coffee mug yesterday to the office. It's looking really good and we are planning on launching the store around the end of January. Here's a pic from the back side of the mug: 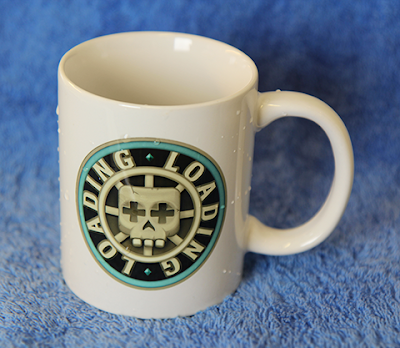 Nice Huh!?
Minigore Monster contest is about to reach the deadline for entries. You still have tomorrow to submit yours! Then we will start to argue, umh, I mean discuss politely, which entries will be in the top 10. I have to say, It's a bunch of difficult decisions for us to make. Among the entries we received a really impressive piece of Fan Art! Here's John on a laptop by Adam Fairhead. 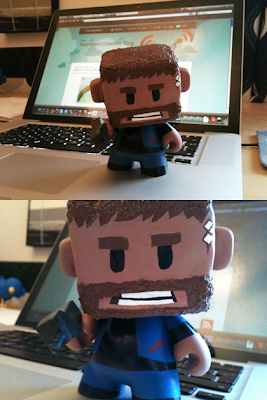 Thanks Adam! You can visit Adam's site here: http://fairheadcreative.com
Be careful with the New Year's rockets and firecrackers and have fun!
Posted by Jussi (Mountain Sheep) at 9:53 AM 72 comments:

I hope you all had a great Christmas! 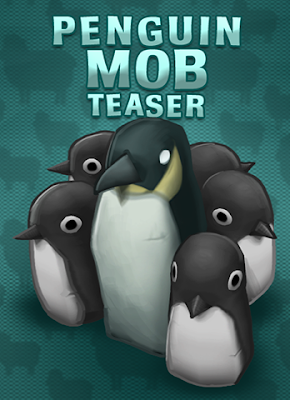 1) This weeks bigger blog post and video will be about the penguins. It will also be about another gameplay addition that involves more than two playable characters on screen simultaneously!

Any guesses how the penguin thing is gonna work?


2) Cult of Mac liked Minigore Episode 4 icon! This is what they said about it:

We love the Minigore icon purely because it features a lovingly crafted picture of an elderly couple wielding a sawn-off shotgun and an uzi. However, it’s not just this Minigore icon that deserves to be recognized – with each update comes a new icon and every one of them has featured a great graphic.

It's great to see that people notice the icon. I put lots of work in each one of them and I can't wait to show you the next icon! It's very different from all the others :)


3) More and more great contest entries are being submitted as the contest is approaching the grand finale! The following entry was drawn on an iPad by Cedric Philippe: 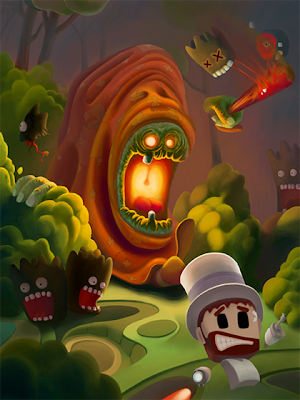 I happened to stumble upon it in his blog over at:
cedricphilippe.blogspot.com

There's still time to submit your own entries and win an iPod touch or Wacom Intuos!
Posted by Timo (Mountain Sheep) at 11:49 AM 49 comments:

We have been working to have an AI controlled character in game to help player to fight off furries. The character who is following the player can get the beast mode, weapon upgrades and has a health of it's own. If the player dies before the helper dies, player gets the control of the helper and can continue playing. This is a nice addition to people who don't have a stable WLAN and/or are missing a second device for multiplayer. You are of course allowed to play with the AI character even if you don't have these problems.
Many of the reported multiplayer issues are possibly caused by a poor WLAN connection. However we tested the build by walking to the 4th floor of the building when we had the router on the 1st floor and it worked fine. There was so much concrete between the router and the devices it's hard for me to imagine any worse WLAN situation, really. Anyway, since it seems the problems are there, we are going to try to find ways to improve the multiplayer over wi-fi so that it will work better. We have also been working on the multiplayer over Game Center and it's improving steadily. We even worked on a voice chat over GC, first working version done!
Thanks for everyone who found and posted bugs on the blog, it really helps. There should be an update coming January where we try to address all the most important bugs. As Timo said earlier, there's not going to be a submission before January because of the holidays. There's nobody to approve the submission at Apple, and we need a break too :)
MOUNTAIN SHEEP WISHES YOU HAPPY HOLIDAYS!!! Eat well, spend time with your family and be nice to Santa ;)
Posted by Jussi (Mountain Sheep) at 9:55 AM 44 comments:

Multiplayer update is out! 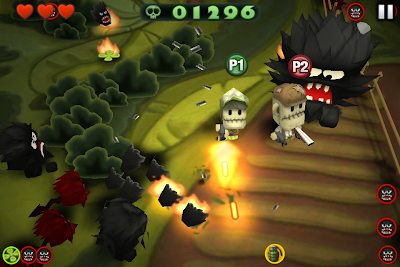 
Let us know how you like and what you would improve in the comments! Revival gameplay seems to be a hot topic and we've discussed a few ideas about it. It would definitely decrease the waiting time if other player dies.

I'm guessing the iPad version could come out in January. App store doesn't accept new submissions during Christmas (23rd - 29th December) so we would have time to test it properly during that time and then submit on 30th for example.
Posted by Timo (Mountain Sheep) at 6:33 AM 82 comments:

It's a new week again for us developers to bring you some news about the game. As you know we submitted the Episode 4. As we are waiting for it to go through Apple, I'm going to show you a video showing me and Kimmo playing multiplayer:
Some of the features are still under development and will be in further updates. We have already tested Game Center online multiplayer and it worked very well from Helsinki to London over 3g network. Still needs some minor adjustments and of course beta testing. This considered we are expecting online multiplayer to be ready quite soon.
Also got a nice surprise for you, some people have been asking about Minigore related merchandise and we are currently designing different kind of coffee mug themes. We actually ordered a few for quality checking purposes and had to make some adjustments. Here's a pic of the very first version of a John Gore themed coffee mug. The picture turned out to be rather dark on the mug. The next version we made a bit brighter and are waiting for the mug to arrive so we can check if it's "customer" ready. About the merchandise in general: We are going to go with a minimum profit to keep the prices as low as possible. 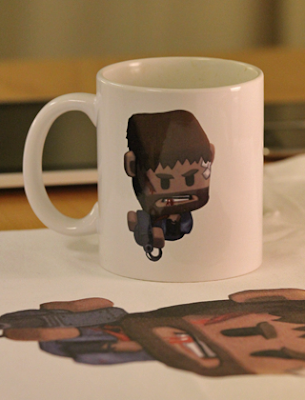 If you got some nice ideas about themes in the merchandise, it would be nice to know. We have already decided to go with John Gore and Elder Gore themes. We were planning to have t-shirts also, but the first version turned out to be of a poor quality and that's something we don't want.
Posted by Jussi (Mountain Sheep) at 8:51 AM 53 comments:

Episode 4 has been submitted!!! 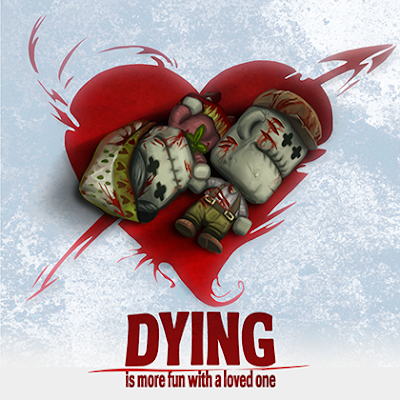 We finally submitted the newest update with the local wi-fi multiplayer. There was some problems with the submission, since we had to hotfix the build about 6 times before we finally got it the way it was supposed to be. Let me just say that things are much more complex when multiplayer is involved.

Right now we have our fingers crossed that the update would make it through Apple before Christmas. It seems unlikely at the moment. We have received reports their approval during December will be uber slow due to many developers submitting updates & apps. There's nothing we can do about it, except to hope for the best. 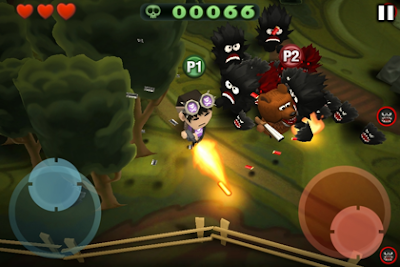 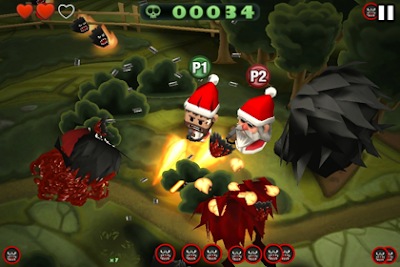 Online multiplayer & bluetooth will follow in a later update!


Also as the Minigore Monster Contest is still alive and kicking, I must remind everybody that you still have the time to submit your entry! More info about the contest can be found from the blog post made WEDNESDAY, NOVEMBER 10, 2010.


We also decided to extend the rules a bit (don't worry nothing dramatic) so that all the entries and artwork posted on the forums will automatically be considered for the contest. This means you don't necessarily have to post your work to the email (sheepcontests@gmail.com) in order to participate.

Some people who sent their entries have been wondering if we received their entry. Unfortunately we don't have time to reply to everybody. If you are unsure if we got it or not, check your email account's "sent" folder to see if it is there. If you can't find it, or don't know how to check, you can resubmit your entry to make sure.
Posted by Timo (Mountain Sheep) at 12:11 PM 54 comments:

The bringer of news is here...Episode 4 news that is!

Remember some of the menus and other non-ingame things not being retina resolution? Now everything is! This and fixing the multiplayer, getting characters ready and adding three times more speech for John Gore (courtesy of Egoraptor of course) is what we've been doing the past weeks. Here's some insight to Ep 4 features!!!
Splash Screen: 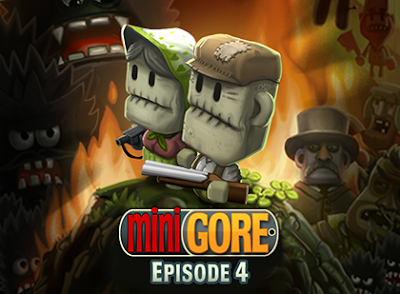 Elder Gore characters are going to be in the next update! They are old, senile and GRUMPY.
They do create havoc with guns nevertheless: 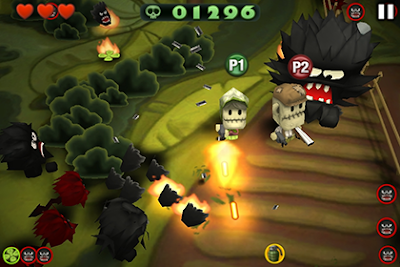 Multiplayer co-op has entered a second beta build test phase. We nailed a handful of wi-fi bandwidth related bugs with utmost effectiveness and it's a lot more playable than before. Things are looking good! Unfortunately I don't know when the build is ready for submission but we are looking into a December release. We want the co-op be as smooth as possible of course.
Zombie Gore and Undead Jenny multiplayer shot: 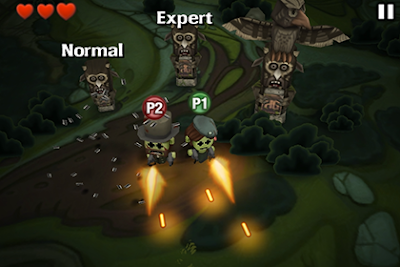 The forums are a starting to be a nice lively place! We have a lot of members posting their art, discussing the game or just getting to know each other. We have about 35 topics revealing and discussing contest entries! I highly recommend the place! In case you haven't joined the forums already, you can do it here: www.mountainsheep.net/forums
Posted by Jussi (Mountain Sheep) at 5:22 AM 90 comments: