NEWS (MARCH 2nd) - Bugs are fixed and the update has been submitted! 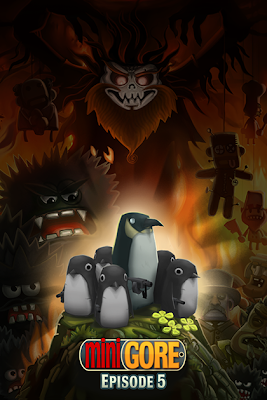 Greetings!
At first, we would like to apologize for the lengthy pause with the blog updates. Kimmo has been very busy showing our new programmers the game code and we are getting good results. If some of you remember, we used to talk a lot about merging the code base with the SD and HD versions (iPod/iPhone & iPad) back in the day. The new release will finally get the HD version of Minigore up to date. It's been a long time coming and I'm sure many of iPad owners can appreciate this! To clarify, this means every new update we do, will update both SD & HD versions simultaneously!

The newest build has been beta tested and is almost ready for submission.
The new version includes:
-Elder Gore AI partner: Grandma is helping Grandpa out
-Penguin Mob: new squad-based gameplay!
-Emperor Penguin: this bird is tough as nails
-3 more Encyclopedia pages
For the HD version it means the following features in addition to the aforementioned:
Undead Jenny, White Gangster Gore, totems, kills instead of "score", kill multipliers, encyclopedia, hearts as health indicators, all kinds of optimizations, remade snow level, Elder Gores and of course wifi co-op multiplayer! The multiplayer works even between an iPhone and iPad :)
Also, if you haven't seen the Death Rally trailer yet, check it out! It's coming next month and it's looking even better than in this video!