It has happened again. The submission for Episode 2 came back rejected due to a corrupted binary. We could blame this on bad luck, we could blame this on conspiracy, personal incompetence or even our dear friend Santa, but what we cannot do is stand by watching the hard work we have put in Minigore and its updates bounce around in what seems like an infinite loop between us and Apple. These updates should have been out there for you guys to play ages ago! We realize we can't change the past, but we can shape the future and that's exactly what we are going to do now.

We want to give you the possibility to play the new Episodes ahead of time before they are released on the AppStore and contribute to the development of Minigore in a way that goes beyond commenting on the blog. We are going to do that by opening up 99 new spots for beta-testers. This is not going to make up for all the delay in bringing out the update, but I am sure it is going to make 99 Minigore fans very happy. We want to show you that despite any hardships and regardless of the number of rejections, Mountain Sheep is holding onto the promises made.

So send us the UDID of your iPhone or iPod along with information of what device you have, how much you play and your age to the address above. Active members of the Minigore blog, top Minigore players based on the online leaderboard and Touch Arcade's Minigore thread contributors will get a priority, so make sure to mention who you are if you are involved in one of the aforementioned.

Lastly, Episode 2 has been re-submitted and every measure taken to ensure it's free from corruption. We are also trying to arrange a fast lane for it in the approval process.
Posted by Kimmo (Mountain Sheep) at 6:49 PM 160 comments:

I'm so glad it's zombies and John and not like Zombies and... me! These little creeps are looming on the Minigore horizon and have got their entire family with them. I, for one, will be taking my railway engine (well, actually it won't be mine) and getting the hell out of here well in advance. Oh, and the railway engine is because the depot is going to be a pretty quiet place when everyone is running for the, yes -- boats and ripping each other to pieces before the zombies even have a chance! Well, luckily John is sticking around as you can see here. He looks determined. 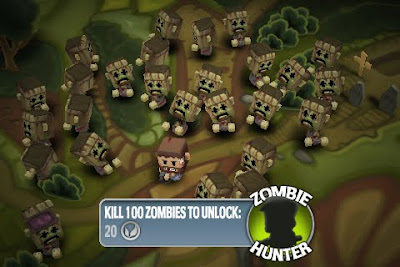 Episode 2 is in the pipe as some you might have read from Minigore Twitter along with a fix to the OS 3.1 music problem. I was able to fix it in a bit over one day after submitting, so we took it and resubmitted on 11th (for those wondering, we did submit once on the 9th, as well, but felt music was important enough to warrant a fix).

I want to let you guys in on something we are planning and I also want to get some wild ideas from you on something.

Let's talk about our plans first. We are going to introduce a new mode in the next update! The new challenge mode gives you a possibility you test your survival skills against a predetermined number of furries. It's complete with online leaderboards, of course, so it's going to be ranking the performance based on time.

Now, about the wild ideas... you guessed correctly, it's the zombies. If you could have the zombies do just one thing, what is the thing you always wanted see them do? The only requirement is that it significantly impacts the way you play against these brainless fellows. Other than that, it can be anything you want - maybe it will involve crowd behavior. Permission to go crazy officially granted!
Posted by Kimmo (Mountain Sheep) at 10:23 AM 126 comments:

Episode 2 rejected, submitting with more features on the 9th

After four weeks at Apple's, the update was finally given a verdict. It is not the good news we were expecting and as bad news it is not quite as controversial as we envisioned. Episode 2 was very simply rejected for crashing at launch on one of Apple's test devices.

We have fixed a crash bug during the development of Episode 3 and are looking at a few more potential offenders for the re-submission of September 9. The re-submission will have Episodes 2 and 3 bundled together with the exception of the grenade which will be fine-tuned for gameplay and comes out with the next episode. I will update the episode tracker at the top of the page accordingly.

Our list of things that take four weeks currently looks as follows:

While all of the above are a fun way to spend a month, let's hope we can tick the last one off the list with the next submission!
Posted by Kimmo (Mountain Sheep) at 5:17 AM 52 comments:

With Episode 2 fumbling about in the dark trying to finding its way out of Apple's approval maze, we have made the decision to take the following from Episode 3, bundle it up with Episode 2 and resubmit on Wednesday next week: 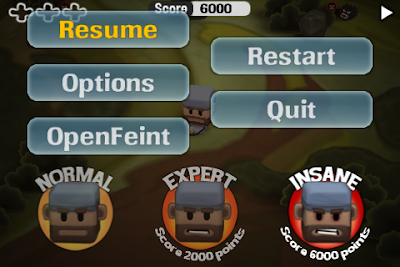 -Achievements (expert and insane)
-Big Flamefurries
-Gameplay improvements (you can now hit a furry standing right next to you)
-Miscellaneous bug fixes
-OpenFeint 2.1 (it looks a lot nicer!)
+
-Furry Sense
-John Gore with the headband (third health)
-full save and restore of game state
-faster firing rate on the shotgun

The above features will be ready for Wednesday (September 9, that is). Episode 2 may still come out before that; we won't be canceling it until right before resubmission.
Posted by Kimmo (Mountain Sheep) at 3:13 AM 47 comments:

Our friends at Illusion Labs have just released a new update for their hugely cool physics adventure Sway, and guess what - John Gore is in it! If you still don't own the game, I suggest you get yourself a copy right away. It's a great one! 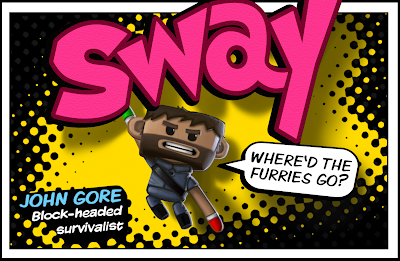